Imagine yourself wanting to make a raspberry sauce.  You toss a couple of mostly thawed bags of raspberries into the pot with some cornstarch and sugar.  The raspberries almost immediately begin to break up.  You use a spoon to stir, bringing up berries from the bottom.  You are looking for any stray ice chunks to break up.  Those ice chunks are usually darker in color..and hey that looks like a darker bit.  A really darker bit…like black.  And sweet Jesus could those be legs?!?  No…. of course not.  How could it be, let me look just a little closer. Those ARE legs.  Oh.  My.  God.
That was the conversation I had inside my head.  What came out of my mouth was slightly less articulate.   I wimpered slightly and backed away from the pot.  I kept whispering “legs..there are legs.”  A bit like a horror movie, I would point, whimper something inarticulate and shudder.  It was a ginormous beetle hanging out in my frozen raspberries.  More than an inch long.  I sealed it in a container from the recycle bin with the berries.  After all, if cockroaches can survive nuclear winter, surely this monster could survive being flash frozen?  Not worth risking it.  I kept having visions of the legs starting to twitch.  Know all that I am shuddering a bit just typing that.  I was going to feed that to people.   Imagine if it had been black berries, and I hadn’t spotted the bug?  YUCK!!

I wrote an email to the company, letting them know that bugs do not equal satisfaction, at least not in this woman’s kitchen.  They kindly wrote back offering a refund and gift certificates for more of their products.  Um no.  No, thank you.  I realize that could happen, it was probably just a freak incident of mutant black bug sneaking its way into my frozen berries.  I took a post-bug hiatus from working with frozen fruit for six months.   A couple of weeks ago, I caved.  The guys at work had been whining for a blueberry cheesecake.  Late fall in Wisconsin is not ideal berrying time, so I had to face the frozen isle.  I made them the Ultimate Cheesecake, using thinned out blueberry jam to create blueberry swirls.  I topped the whole thing with bug free blueberry topping.  The topping would go well with a variety of desserts, like pound cake or the cheesecake I made.  I can thankfully add that no giant bugs emerged from the depths of the pot and was nightmare free. 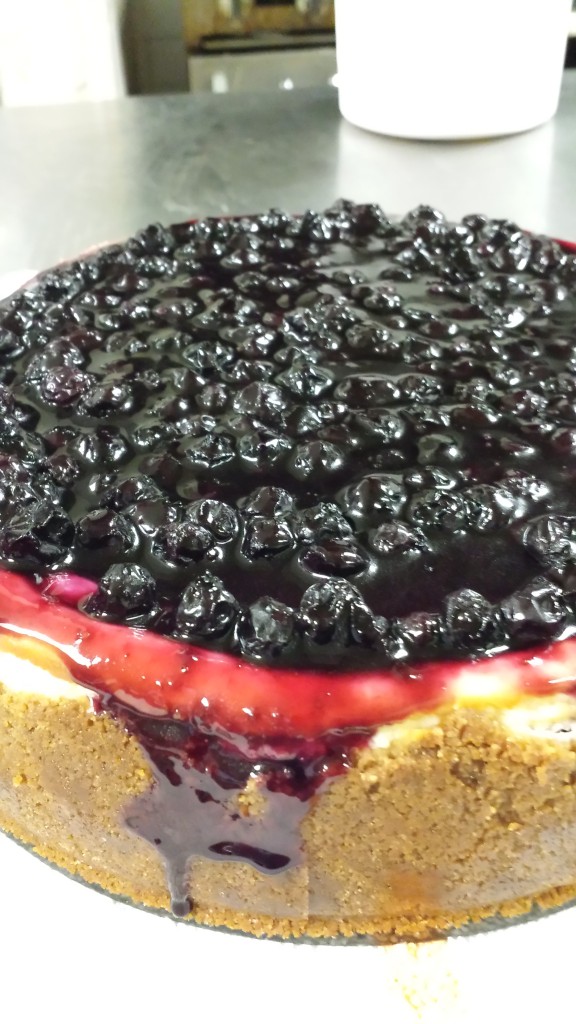 Congratulations to Starbucks for the creation of Pumpkin Spice Mania.  You can find that flavor available in nearly everything from beef jerky (okay I am judging-yuck), M&M’s, beer and donuts to candles and air fresheners.  In fact, since 2008 the number of pumpkin spice products has risen well over 200%.  I had a horrifying moment at the gas station the other day when I thought I saw pumpkin flavored Snickers.   After a few seconds of beginning the “They have gone too far” rant in my head I realized they were pumpkin shaped Snickers.  The real surprise there was that it shocked me to think such a thing was out of place considering how many product lines are trying to cash in on trend.

Now normally I like to think that I avoid trendiness.  I make pumpkin spice cupcakes in March, because I am a rebel.  That is right, there is no telling what I will get up to-look out world!  To my shame, I now have to admit to hopping on the bandwagon.  In my defense, it was a special request from a friend of mine and it turned out lovely.  For those of you who saw the pictures on Facebook and asked if I delivered…here is the recipe. 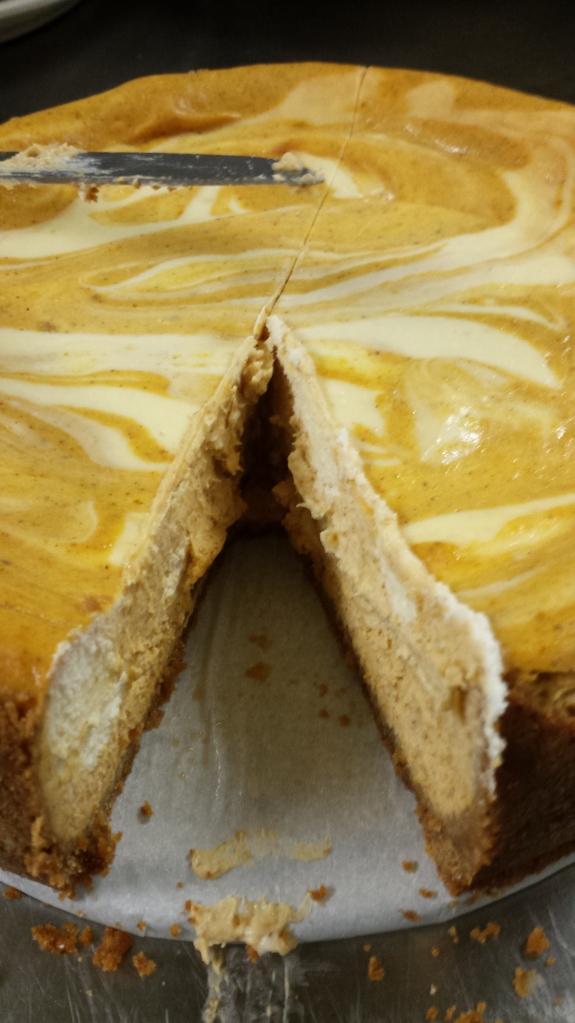 Fall is finally upon us and with it, cooler weather.  No longer do we (and by we I mean I) look at our kitchens as one of the levels of hell that Dante inexplicably neglected to mention.   Time once again for cheesecakes that take hours in the oven and cookies and breads.  Time for chili and roasts and soups and stews.  Almost time for apple everything and more pumpkin spiced products than is decent.  Time to get everyone fat for winter, also time for me to get jogging so I look thinner than all the people I am fattening up!

I have a friend who used to email me a “National Food Day” email.  One day she sent me an email for National Indian Pudding Day.  I had no idea what on earth that was, let alone what it did to deserve a day of its own.  My research tells me that it is a New England dish, and that the Indian refers to the cornmeal from which it is made.  Cornmeal was once called Indian meal (please no hate mail).  As far as getting its own day, no idea why, perhaps it was what Paul Revere stopped and ate on his ride.  I found a few recipes in my research and there seems to be several different versions with several different spice mixes.  As I thought of ginger as soon as I read the molasses, I decided to make mine as much like a gingerbread cookie as possible.  Indian pudding is not a beautiful dish when it comes out of the oven.  No one will look at it and demand to put it on the cover of a magazine.  Some things are meant to be eaten, not become the equivalent of a food selfie.  Just spoon some into a bowl, add a scoop of vanilla ice cream, close your eyes and enjoy!

As most people I know don’t make a lot of puddings of this type,  I am adding reheating instructions.  Refrigerate any leftovers.  They can be reheated in the oven if you cover with aluminum foil at the same baking temperature for 45 minutes.  Somethings are just better reheated in the oven (like pizza) and avoiding the microwave all together. 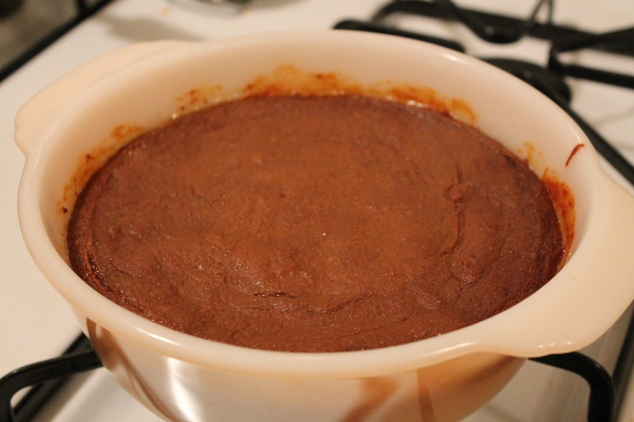 Not all comfort food is beautiful. 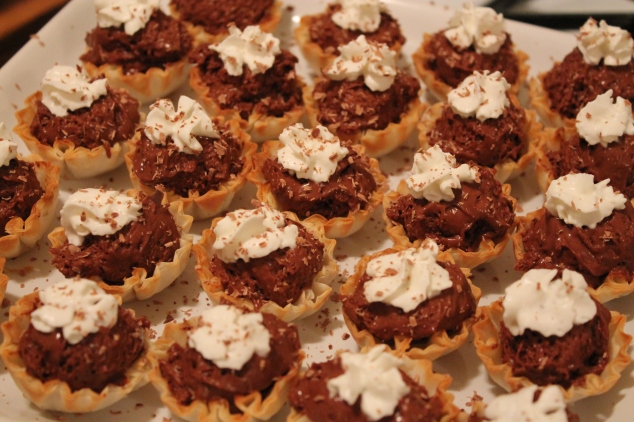 No drooling on the screen please.

I know I had you at Chocolate, right?  Don’t worry too much about the calories on this one, you will earn them.  Yes, I know it is me saying it, and I promised to make you chubby so I don’t have to diet quite so hard….but this time, I mean it.  This recipe dirties an incredible amount of dishes.  It is also quite whisky…but worth it (sorry, I couldn’t resist).  I felt like a genius after making these, until I tried to transport them.  They do not travel well.  One corner turned and they became an ugly pile of rich chocolate deliciousness that I needed photographic evidence to prove myself with.  In the future, I will make them at home and gorge myself on them before the dirty dish guilt kicks in.  For the cups, I cheated because I ran out of dishes, and just bought Athens Mini Fillo Shells  (I swear I included the link so you know I know how to spell).  I also used whipped cream out of a can, don’t judge me.

The Queen of Hearts,

She made some tarts,

All on a summer’s day;

The Knave of Hearts,

He stole those tarts,

And took them clean away;

The King of Hearts,

Called for the tarts,

And beat the knave full sore;

The Knave of Hearts,

Brought back the tarts,

And swore he’d steal no more.

Did you ever read Alice in Wonderland and wonder what a tart was?  I mean it would have to be pretty damned amazing if the King of Hearts was willing to beat the Knave for them right?  I can finally see what the fuss is about.  I found blueberries on sale and decided to have some fun with them (don’t worry, that does not mean anything icky).  Some of my work guinea pigs had asked for a fruit pie..but I needed to put my own twist on it.  I decided on a free form blueberry tart.

Due to the fact that Wisconsin lost the bid for summer weather, it was cool enough for me to make the crust from scratch.  If you have never done so, or are one of those smug bastards who just whips it up in their food processor, let me tell you, cool weather is important.  The key to the flaky yumminess is the cold butter.  I tend to wax eloquent (in my own head at least) about how important the butter being in the right state is.  If a recipe calls for cold butter, it means business.  Likewise if a cookie recipe wants softened butter, melted will not do.  Trust me, it’s important.  Anyways, this was the first time I did not cheat with a Pillsbury Pie Crust, and I am so happy with the results.

The guinea pigs were also happy….to the point of being a little scary.  One of them offered (?) to stalk me so they could find out where I lived and force me to do nothing but make them more.  Who knew I could bake something so delicious it would require a restraining order? I made the recipe again, not a gun point I swear, but cut the dough into quarters prior to rolling out and made four smaller tarts and they turned out just as well. 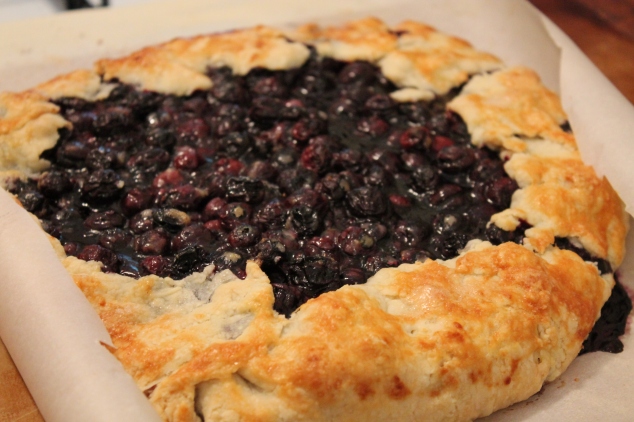